No Sheep Heads For Now 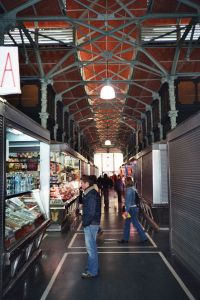 Once upon a time, a little tour through San Miguel Market was an excellent opportunity to send shivers up the spines of visitors just before going to lunch in La Latina. Tripe, entire rabbits, and skinless sheep heads with the eyes still in place (for a nice broth, I suppose) are just some of the items meant for human consumption in this spectacular 90-year-old building. The ghoulish tour made lunch companions content with their less daring choices of patatas bravas and pincho de tortilla.

Spanish like to say they eat EVERYTHING whereas the rest of Europe would disguise these animal parts as cheap sausage or mystery meat. Looking at the offerings in markets and supermarkets, they’re not exaggerating. Can someone please explain to me the thrill of scraping out pig paws?

Many more markets can be found in Madrid, but San Miguel is by far the most beautiful. Construction was finished in 1916 and the decision to build this market, as well as many others in Madrid, came from the fact that the expanding capital needed to find a solution to the ad hoc system of markets clogging the steets. Lots of glass and curly wrought iron make the Mercado de San Miguel look very light, classic and deeply Spanish.

Sadly, nowadays it is also very closed. Last year even the last fruteria (fruit shop) and pescaderia (fish shop) left, neither of them exactly known for the quality or variety of their products. The market is under reconstruction, but, if you ask neighbours what will happen to it, they start fluttering their hands and fixate their eyes on a point far beyond the horizon. They say it might be a market again, at some point in the future, or something cultural, or…. The latest oficial news is that the spaces were bought by a company called El Gastródromo, that wants to turn it into a market with room for bars, restaurants and cultural activities concerning food. Until then you have to take your visitors to nearby, but less alluring, Mercado de la Cebada in La Latina or the sheep heads will just have to wait.

This entry was posted in Food and tagged Mercado San Miguel. Bookmark the permalink.

One response to “No Sheep Heads For Now”