The Cross That Might As Well Be a Question Mark 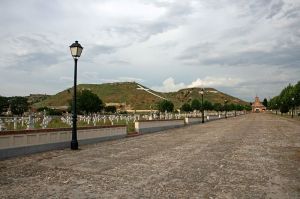 The big white cross in the hills you see when you are staring out of your plane- or any other window of Barajas airport- is not the work of a religious fanatic with too much time on his hands or a cheap attempt to imitate Rio de Janeiro’s Christ-the-Redeemer: you are actually staring directly at the Franco-era.

The cross is located just outside the graveyard of Paracuellos de Jarama, a small village so plain and dull you would be forgiven for never having heard of it, if it weren’t for the fact that perhaps the biggest bloodbath in the civil war took place there.

During the war (1936-1939), it was not uncommon for both the nationalists and the republicans to move their prisoners. Changing battlefronts or simply attempts to exhaust captives saw inmates being forced to move to their new prisons- known as ‘sacas’ in Spanish. This also happened in November 1936, when heavy fighting took place to gain control of Madrid. Prisoners kept by the republicans were forced out of their old cells and were put in buses and trucks. For reasons still unknown many groups of prisoners, including soldiers, priests, or simply nationalist supporters were not sent to Valencia, where the republicans were still in charge and where the surviving prisoners went to, but were instead driven to the banks of the rivers Jarama and Henares and killed. The cross marks the place where the dead were eventually buried.

And that is also where the known facts end. It is not clear how many people died: estimations are between 2.000 and 5.000. It is not clear who gave orders: several names circulate. It remains a mystery why some groups of prisoners were killed and why some groups reached their new cells without problems: there were sacas every day that month and not every saca was fatal. Why? The site of the Matanzas de Paracuellos is now a battleground for historians. The cross that you see is very much a question mark as well.